I’d say the Aflac kid better run for the hills after this schellacking … but who are we kidding? At 1.1 yards per carry, we know he can’t run to save his life … or his job. Fire this bum right now! Keep him from getting on the team plane. Thirty yards rushing? My walk from my desk to the toilet is longer than that! And what happens in that toilet is exactly what Saban’s offense was tonight.

I know it’s called “football,” but that doesn’t mean you’re supposed to kick field goals all night. If not for a gift fumble by the aforementioned WALK ON QUARTERBACK (IN THE NATIONAL CHAMPIONSHIP GAME, YOU LOST TO A WALK ON), ol’ Saint Nick never would have sniffed the end zone. And he missed a field goal for good measure, which led to a Georgia touchdown.

Here are some fun facts:

This guy is a hack. Pull a Pat Haden and fire him on the tarmac!

In one of his patented senile rants, good ole ‘Aint Nick bit the hand that feeds him, calling the Alabama fan base “self absorbed.” Why? He was butt hurt that real Alabama fans called him out for lucking his way to victory against an Arkansas team he should have blown out. The excuse train was in full throttle for the Aflac kid. “We’re going to get everybody’s best game. I don’t know why people can’t understand that.” The crybaby continued, “It’s not fair to our players that they get everybody’s best game.” He appeared near tears as he added, “Everybody wants to beat us.”

At this point, his senility kicked in. “We’re not happy to win a game anymore. We’re not happy to win a game at all.” What? I don’t think you should be admitting that, Nick. “I have too much respect for the other team.” He then doubled down. “I don’t care what kind of fan you are. Nobody wants to win.” Unfortunately, no one was there to take the microphone away, or at least give the poor guy a Namenda. So he continued by criticizing his own players. “They’re not perfect. They’re just college students.”

He tried to come back to his original point, before getting confused. “So for all you self-absorbed folks out there that can’t look past your own self to appreciate what other people are doing …” He paused for what seemed like an hour, and then he tried to order soup.

Can we please fire this guy before he wanders into the wrong locker room?

In a result that could only surprise the biggest Nick Saban groupies, the Alabama Crimson Tide defense was porous, surrendering 72 points in a deflating loss to Iona. I have word from several anonymous sources that Nick Saban did not even prepare for today’s game. “Coach Saban at the Iona game? I don’t think he was even there,” said one source. Another source proclaimed, “Coach Saban was in no way involved” with the Iona game. There you have it! He wasn’t even at the game! He was probably too busy selling out and shooting another Aflac commercial. I’ve got news for you, Nicky — Aflac’s mascot is a duck. You’re in the wrong state, Nick! You like Oregon? I’ll bet you do. Oregon only surrendered 38 points to #16 Utah. That would be the ’85 Bears defense compared to the 72 you gave up to Iona. Quack quack, you hack.

We may have to update the our collections of Nick Saban looking like a d-bag.

Saban tested positive for the virus after eating bat soup at a market in Wuhan, China last month while recruiting an assistant ball boy.

Thousands of University of Alabama students and staff are now under quarantine. Alabama football spring practice has been canceled.

It is likely that Saban will be directly responsible for dozens if not hundreds of deaths across the state of Alabama over the coming weeks. Stay safe out there. And stay away from Nick Saban.

Did you like this article? You’ll love our petition.

Over 500 signatures have been added to the petition since the 46-41 debacle against LSU.

The sad truth is this: Nick Saban chokes in big games. He’s gotta go. Get him the hell outta here!

All of the top 8 ranked teams played last weekend. All of them also won, as they should have. Do you want to guess which team had the smallest margin of victory? It’s the team coached by this corporate shill. 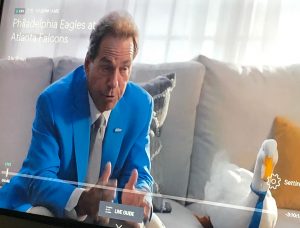 You would think that we pay this guy enough to not have to take time away from the football team to hang out with the stupid AFLAC Duck.  Get him out of here and get someone in who cares about the Tide and our football program!

And I’m not even making that up… Notre Freaking Lame played Clemson tougher than Saban’s Alabama squad did in the national championship game. 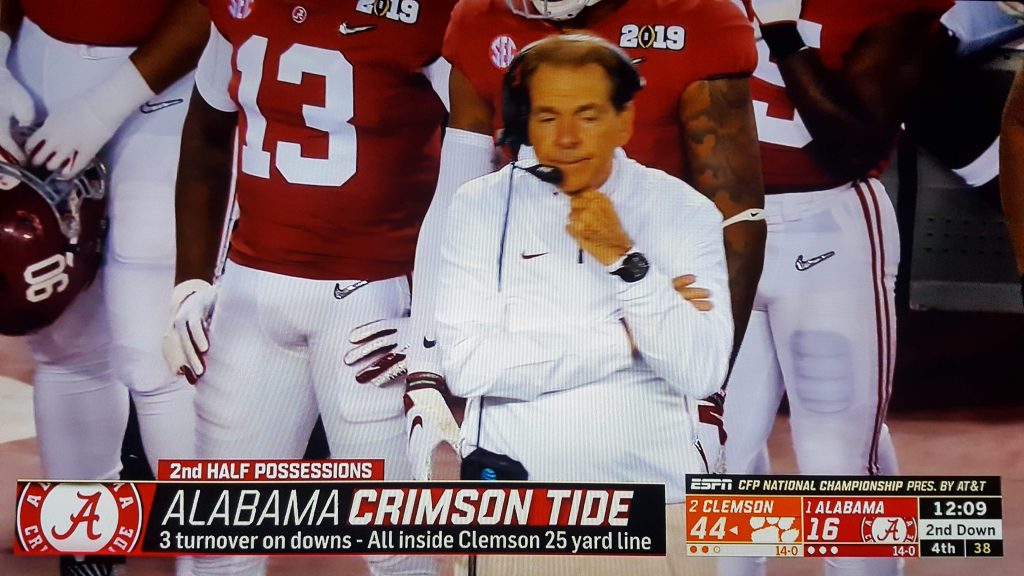 Tonight, Saban was the cause of Alabama’s biggest blowout defeat in over a decade!

Let that sink in.

Time to fire this clown. Sign the petition now!

Let’s break down the semi final action that we saw this year.

Clemson gets the #2 seed. So they play the #3 seed (should be a tougher matchup right?)

Let’s look at points against

Where do the numbers 34 and 3 come from?  They are the points allowed by Bama and Clemson respectively.  The SEC is supposed to be a hard nosed defensive powerhouse conference and Nick Saban just gave up more than 11 times as many points to the #4 seed as Dabo gave up to the #3 seed.  Something is wrong here and it is time for Nick to go!

It’s not often that we link to external sources here at FNS.com, but this guy is worth a link. Check out this video and be prepared to be blown away by the truth.