Throughout history, the world has experience several successful leaders of thought, action, but most importantly inspiration. With their success came popularity among the individuals they inspired to rise above dismal conditions for a brave new world of progress and the preservation of posterity. 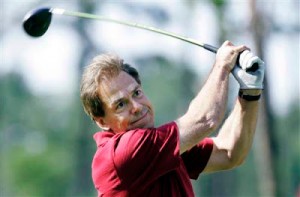 Nick Saban is not one of these individuals.

In fact, the qualities that these individuals share don’t generally apply to much of anything in the state of Alabama let alone one of the most pompous coaches in history.

Below is a list of the 10 most popular leaders in history in chronological order:

So the next time you hear about Nick’s 150+ career wins or his ability to lead a team to back-to-back (to back?) BCS championship wins, just think to yourself “is he top 10 material?”.  Chances are, he ain’t.

2 thoughts on “Top 10 Most Popular Leaders in History (Hint: Nick Saban Ain’t One of ‘Em!)”