There is no shame in being bald, we all know that it is a genetic trait passed down from your mother’s father. That is all of us except Nick Saban. We are breaking the story here that the reason Nick Saban is always seen with what appears to be perfect looking hair is because its not his! That’s right, the image below definitively proves that Nick Saban suffers from male pattern baldness and has been wearing a toupee and lying about it ever since he broke into the college ranks.

If he is willing to lie about something that affects over 40% of men by the time they reach the age of 35, what else is he lying about? 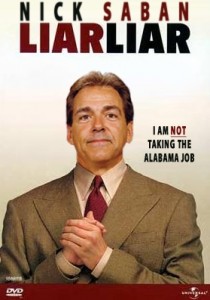 …Lie to me twice, and yo ass gots ta go!

One thought on “Lie to Me Once, Shame on You…”